-
I pride myself on being fairly well informed.  I feel good that I can intelligently discuss current events, and often fantasize about having tête-à-têtes with the likes of Chris Hayes, Rachel Maddow, or Ron Wyden.  Thus, I was taken aback when I received an email message from a reader, identifying themselves only as "Virgy."  The reader wanted to know why I hadn’t done more to shine a light on the plight of black-owned businesses during the era of the pandemic. 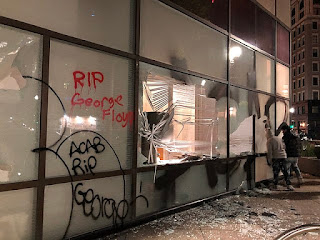 |Subject: Oakland business destroyed during George Floyd riots |
| Date: 05/29/2020 | Photographer: Daniel Arauz |
| This image is licensed under Creative Commons Attribution 2.0 |
Being a middle-aged suburban white man, I'd assumed Covid-19 had brought disaster to small businesses across the board.  However, I wasn't taking a few factors into account.
Descended from slaves unpaid for their work, black families haven't been able to inherit wealth and property from generation to generation, creating an income disparity between white & black households. From 1992 to 2006 the income disparity between white & black households grew from $100,000 to $154,000.  On average, this statistic leaves black owners of small businesses less of a post pandemic safety net.
Of course, the pandemic didn't happen inside of a vacuum.  2020 saw multiple Black Lives Matter protests erupt into destructive riots, many of which occurred in justifiably enraged black neighborhoods.  Said uprisings resulted in heavily damaging, if not outright destroying, multiple already struggling black-owned businesses.
Covid-19 and the riots have hurt most of us to one degree or another.  Thus, it's easy for some of us to forget that some people have been hit worse than we were.  If you're like me, you can only donate to so many good causes and still buy groceries.   Fortunately, Virgy sent me a link to a blog entry with links to 181 Black-Owned Businesses.  Rather than donating to charity, utilizing some of these businesses may allow you to make a difference by spending money you were going to spend anyway.
Written by James Kiester at 4:21 PM