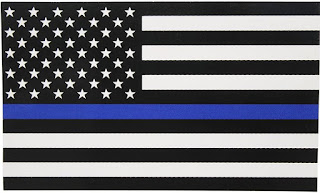 | Subject - "Thin blue line," pro-police flag representing the police standing between order & chaos |
These, and other avoidably tragic events lead to a series of protests calling for the police to be "defunded," as if such a thing could be accomplished with the stroke of a pen, without compromising public safety.  That was eight weeks ago.  Portlanders are still protesting.
In response to these extended protests, President Trump has mobilized a federal paramilitary task force to subdue protesters.  Utilizing tear gas, pepper spray, abduction, and other Gestapo-esc tactics the agents have only succeeded in increasing the level of violence during the protests.
Uuugh..., where do I begin?
OK, first of all, POLICE ARE NOT THE BAD GUYS!  Yes, the actions of, apparently, racist officers have resulted in the wrongful deaths of American citizens.  Yet, defunding law enforcement, reducing their ability to respond to legitimate emergencies, will do nothing to discourage the presence of racism within law enforcement.  Sadly, there will always be racist law enforcement officers just a there will always be racist soldiers, lawyers, grocers, doctors, fire fighters, etc...
Racism isn't a law enforcement problem, it's a societal problem.  I believe a minority of Americans are racists, but said minority permeates all walks of life.
At this point I must confess to a bit of bias on my part.  During the late 90s and early 2000s I did volunteer work for the Sheriff's Department of Washington County in Oregon.  I was, admittedly pro-police when I started, and my time only made me more pro-police.
Every officer I got to know struck me as someone who wanted to help people and make their community a better place.
Are there outliers who want to wear a badge so they can bash ni##&%$?  Of course there are.  And when these idiots let their machismo call the shots, and they hurt, or worse yet kill, a citizen of color, are their crimes too often swept under the rug?  No question.
Yet, the answer isn't to vilify the police as a whole.  The answer lies in giving personality tests to cadets to weed out possible racists before they're given a badge.  It also makes sense to create an independent civilian agency which  can investigate crimes committed by police and hold bad actors accountable.
As for the Portland protests themselves, at this point they have nothing to do with George Floyd.  Protesters are determined not to back down from federal soldiers, and the paramilitary agents aren't going to capitulate to ultra liberal trouble makers.  The situation has devolved into a game of, "Who's Man Part Is Bigger."
-
I was in the middle of writing this piece when Oregon's Governor, Kate Brown, negotiated a withdrawal of Federal troops from Portland in exchange for a promise to deploy state police to protect the Mark Hatfield Federal Courthouse.
On a personal level, I was a tiny bit annoyed by the news of the agreed upon withdrawal since it meant I had to rewrite the end of this blog.  My blogging schedule aside though, the agreement may be a sign that tensions are on the verge of easing.
I have no idea if the agreement will be honored, or for how long the protests will last.  If the protesters are waiting for police to be defunded before calling an end to their activities, I fear the protests will drag on for a while.
Written by James Kiester at 2:18 PM